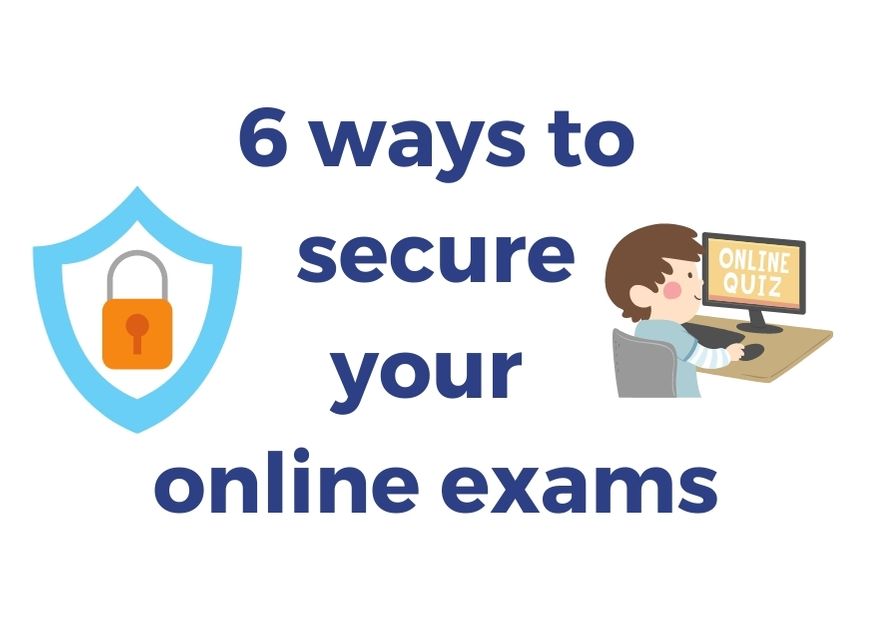 With the convenience of online exams, there are some challenges that administrators need to take into consideration.

Conducting an exam with technology can be easy but it also poses security risks for those who administer or monitor them- especially hackers looking at compromising sensitive data which could lead towards identity theft!

What is an Online Exam?

Using technology you can assess candidate related to a particular subject/ topic. Traditional pen and paper-based exam are replaced with the computer-enabled digital assessment which can simplify many administrative activities for the institute.

What all are the challenges of an Online Exam?

Well, before we can start with the challenges being faced with Online Exams, let me tell you technology have come far away and have developed solutions for many of the challenges already.

Online Exams allows you with the freedom to appear for the same from any remote location of your choice.

Insecure Online exam provides an opportunity for candidates to take help from external sources while attempting the exam online. If proper security measures are not taken then online examination implementation may result in increases activity of malpractices.

Freedom to browse the web and copy

An Online Exam from a remote location, sounds more like an invitation for an Open Book Test (Same one which we used to appear for when we’re in the schools).

Well, you as an exam controller don’t have any control over this malpractice, do you?

Frankly, an Online Exam seems like an open ground to cheat and attempt malpractices to the candidate who is appearing for the same.

Here are 6 ways to secure your online exams. 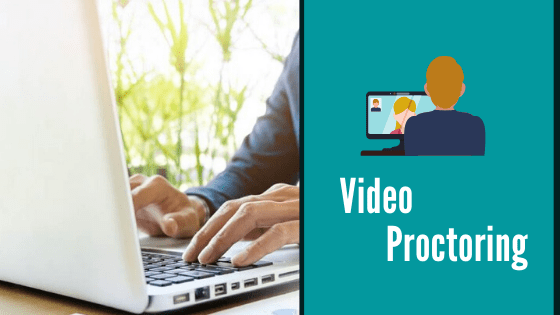 The greatest advantage that Online Exams have ever offered is remote exam conduction; it allowed the candidate to appear for the exam from any remote location of their choice.

Parallel to this great advantage, the process encountered many shortcomings in terms of security. Minimizing the increasing rate of malpractices became inevitable with the help of Remote Proctored Online Exams.

What does Online Proctoring mean?

Online Proctoring extends the freedom to invigilate from a remote location to the invigilator; in other words, the invigilator becomes a remote proctor and ensures the security and integrity of the Online Exam.

What is Video Proctoring?

To be very specific, Video Proctoring is a mechanism which uses the live video streaming or recorded video as a medium to ensure the security and integrity of an Online Exam.

Video Proctoring uses the web camera mounted on the candidates’ computer as the source to record the video for the proctoring activity.

Video Proctoring works parallel to the Online Exam process. When a candidate is all set to appear for an Online Exam, he/she needs to login to the system on which the Invigilator or Remote Proctor is already logged in from the other end.

Initially, the candidate has to complete the formal identity verification process where the remote proctor shall confirm the identity of the candidate.

The proctor would verify the candidates’ identity against the identity proofs submitted at the time of registration.

Post the successful verification session, the candidate can proceed for the Online Exam.

Video Proctoring activity can be executed with two different sets of actions.

The remote proctor would continuously monitor the remote candidate appearing for the exam through completely live video streaming.

If the proctor notices any suspicious activities or any signs of malpractice through the visuals being displayed, he/she can directly prompt the candidate and holds the right to suspend the Online Exam conduction, at any point.

In this very case, the proctor can go offline once the verification is done. The webcam mounted on the computer of the candidate would record the complete video for the Online Exam activity.

The recorded video would be saved on a cloud server and would be available for evaluation to the proctor, at any later point of time. The proctor would watch the complete video for the Online Exam and confirm the integrity and security of the process. Video Proctoring eases out a lot of Online Exam Security hassles and also saves a considerable amount of time and money to you. 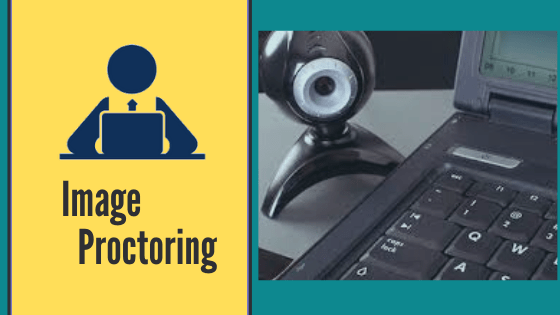 Image Proctoring is yet another mechanism of Online Proctoring which helps you conduct secured online exams under the limited internet connectivity situations.

What is Image Proctoring?

Image Proctoring is a lightweight Online/Remote Proctoring mechanism, which uses the web camera to capture images of the candidate appearing for the Online Exam, after a certain interval of time.

The proctor can later analyze the bank of images captured during image proctoring activity to ensure the security of the Online Exam.

When Image Proctoring is essential?

If you wish to conduct secured online exams for a locality where no stable internet connection is available or the bandwidth is unstable, Image proctoring can be the most essential security mechanism to prevent malpractices during an Online Exam.

With Image Proctoring, the system would capture a set of 60 to 90 images, based on the time or duration of the exam.

Let’s consider if the stipulated time for the exam is 90 mins, then you can arrange a set up where the system would capture 90 images of the candidate, an image per minute.

The proctor would access this set of images stored on a cloud server at later point of time. And, the proctor can opt-out to report the candidate, if he/she happens to attempt any suspicious activity throughout the captured images of Online Exam. 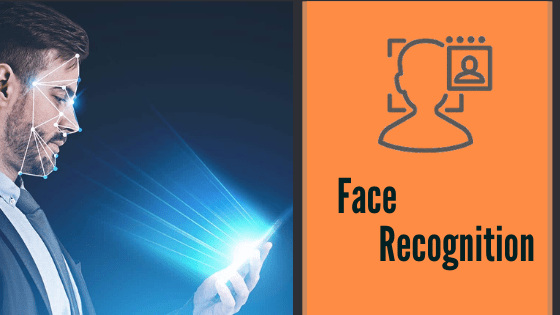 With the mobile phone unlocking feature, Face Recognition has touch-based every individuals’ perception towards AI and technology.

Similarly, Face Recognition technology can easily be paired with Video or Image Proctoring and we have a prominent solution figured to cut off the disguised face malpractices, permanently.

How Face Recognition would function for securing online exams?

A complete software empowered with Video/Image proctoring and AI-powered Face Recognition technology would work as a bridge between Online Examination Process and Online Exam Security.

The Online Examination Process remains all the same; the system would store all the identity verification details at the time of the initial verification process.

The system would match and compare the photo of the candidate appearing for the exam with AI-powered Face Recognition, and allows the candidate to proceed with the Online Exam.

The Video/ Image proctoring mechanism would do its job with recording video/ capturing images after a fixed interval of time.

Ultimately, AI-powered Face Recognition would compare the face of the candidate appearing for the online exam with the I Card or photo submitted, thoroughly and throughout for the video recorded/ for all the images captured.

Any deviation observed in the face of the candidate would be considered as malpractice and would be reported.

No offence, there would be a full-fledged core report which would substantially stand the ground for the malpractices reported.

The perfect combination of technologies could turn out to be the best solution to secure online exams and keep them 100% free from  malpractices. 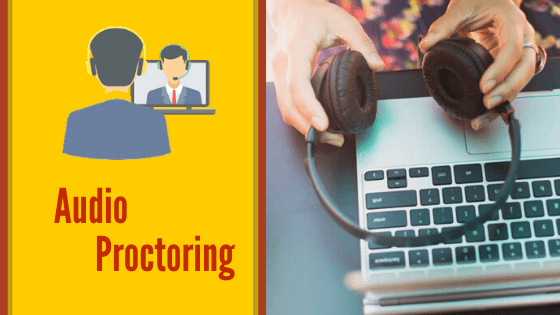 Alongside Video Streaming and Image Capturing, Audio or Voice capturing is an equally essential factor to be considered while ensuring the security of the Online Exam.

With the growing technology, cheating practices have also grown to an extent. Audio Proctoring is one such a preventive measure to consider when it comes to seizing the complete security for an Online Exam.

What is Audio Proctoring?

Audio Proctoring is a mechanism that records each bit of voice, sound or noise from the environment where the remote candidate is appearing for the Online Exam.

The invigilator or proctor can later analyze the audio recorded for suspicious voice notes or distortions.

Only visuals might not be able to justify the security of Online Exams. This is why we need a mechanism like Audio Proctoring, which can help us analyze the Online Exam environment for the audio or voice malpractices.

Fair chances are there that, the candidate appearing for the exam might appear sober in the video and image proctoring but he/she might be seeking some audio/voice-based help to attempt cheating in the Online Exam.

The audio proctoring mechanism would make sure that the online exam is conducted in 100% secured and controlled remote environment.

Even the slightest deviations in terms of sound waves would be recorded with Audio Proctoring. The proctor would have the full-fledged access to the audio associated with every candidate who appeared for the online exam through the cloud server. The proctor can wisely analyze and identify the malpractices encountered.

5. Secure Browser: Bars the candidate from browsing the internet during Online Exam 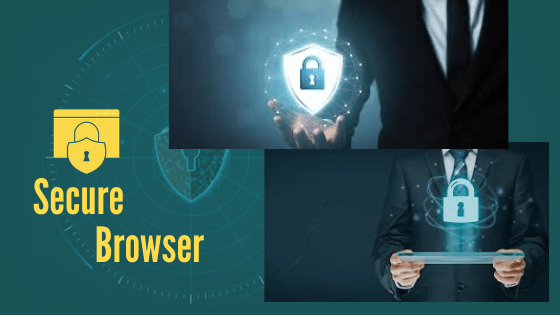 Online Exams, full-fledged internet access; this might sound like an open ground for cheating to the candidates who are appearing for the online exam. But, it could turn out to be a nightmare to them with Secure Browser technology.

What is secure browser technology?

Secure browser is nothing but a preventive mechanism which doesn’t allow the user to open an additional browsing window other than the one through which he/she is connected with the online exam activity.

How Secure Browser can help you secure online exam process?

Online Exams are supposed to be conducted in an environment that offers good internet connectivity. But, to achieve the desired security and integrity with the Online Exams, secure browser is just the right approach to follow.

Once a candidate starts with the online exam, he/she would not be allowed to access any extra tab or browsing window other than the one through which he/she is appearing for the exam.

On the other hand, we are also allowed to make such a provision where the system would voluntarily warn the candidate for the defined number of times on attempting the window switching. If the candidate continues the same behaviour post being warned for the set number of times, the system would automatically suspend the Online Exam for him/her.  Secure Browser technique is a simple way to add security mechanism for your online exam process.

6. Audit Logging: Monitors each click with minute details of the Online Exam 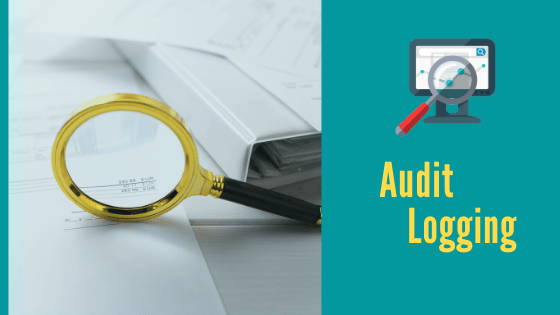 Audit logging technology keeps track of the entire user activity with the help of the IP address of the user.

Audit Logging is a very powerful mechanism that tracks the user for each activity that he/she performs. May it be session Login/Log Out or may it be the navigation between the questions of the Online exam, everything is tracked.

These kinds of logs are recorded for each of the candidates who are appearing for the Online Exam and are accessible to the proctor at later point of time.

The proctor can opt-out to analyze the Audit Logs for any candidate. If he/she observes any suspicious activity amongst the logs recorded, it can be immediately reported and counteraction could be taken against the candidate.

While conducting online exams you can not ignore security aspect of the implementation. Using innovative security mechanism like Remote Proctoring, Audit logging , secure Browser you can ensure security of the solution. Using Artificial intelligence you can identify, detect cheating patterns.

Many of the organizations  have started using those practices for online exam security.

Swapnil has experience of more than 15 years in the Information Technology sector. He has been working on digital platforms in the education sector. Swapnil is an avid reader and writes articles on technology and leading developments in the education and IT sectors.

Swapnil is the founder of Splashgain, an Education Technology company from India working on various innovative EdTech platforms for examinations, proctoring solutions, digital admission process and more. Splashgain has been working with many educational institutes and universities for AI-powered innovations and solutions to transform the education sector.

Splashgain has also filed a patent for an innovative product based on AI.

Efficiently Generate Question Papers with “These” Amazing Features of Eklavvya

Steps to manage the coding questions